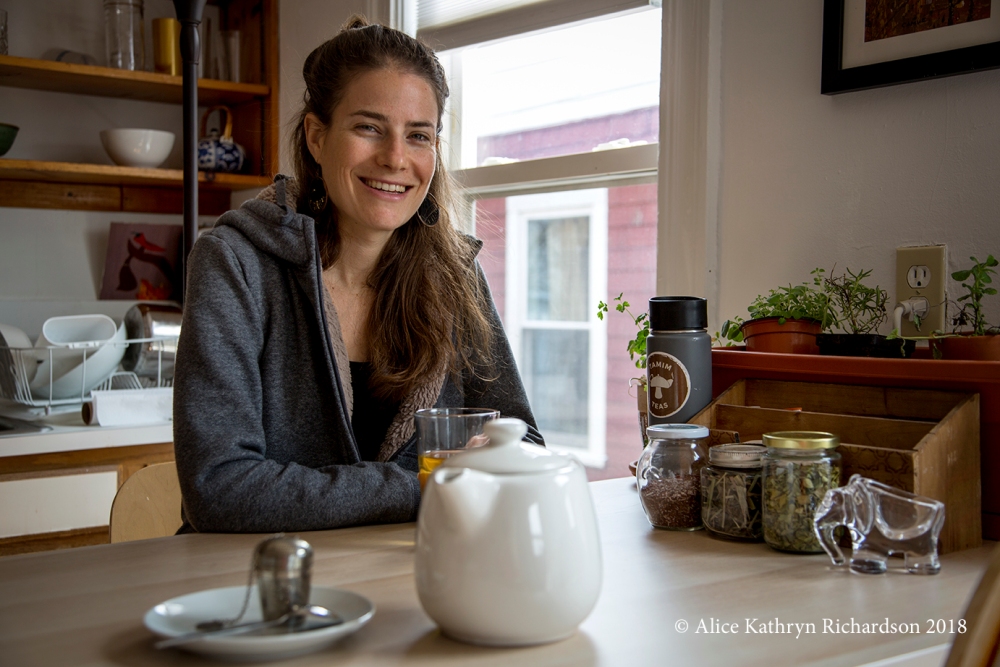 A bite of ginger, a little nuttiness from the turmeric, and a deep earthiness. That must be the taste of the mushrooms… or maybe that’s still the turmeric. The hot cup of Lion’s Share mushroom tea steams, and makes the room smell of ginger.

In Liat Racin’s kitchen in Somerville, the shelves are lined with jars of spices and the countertops are bathed in sunlight. When Liat first started drinking mushroom tea fifteen years ago, she learned that her grandmother used to drink it. Originally from Belarus, her grandmother would ask anyone traveling to Eastern Europe to bring her back some chaga mushrooms. “I was too young, but my father remembers it, and so for me there was this connection like ‘everyone knows about it but me?’, Liat laughs, then pauses. “It’s just this knowledge that’s really embedded in older culture and tradition, even here.”

Two thousand years ago, Chinese royalty drank mushroom tea. “It was so highly revered that the general population didn’t have access to these highly acclaimed mushrooms. It’s an art. And it’s just amazing that no matter where I go in the world… it seems as if every culture has some sort of knowledge and use and culture around it.” Liat is the founder of Tamim Teas, an all-organic, caffeine-free mushroom tea company that creates more palatable tea blends than those drank two thousand years ago by mixing locally sourced medicinal mushrooms with sweet and spicy herbs. 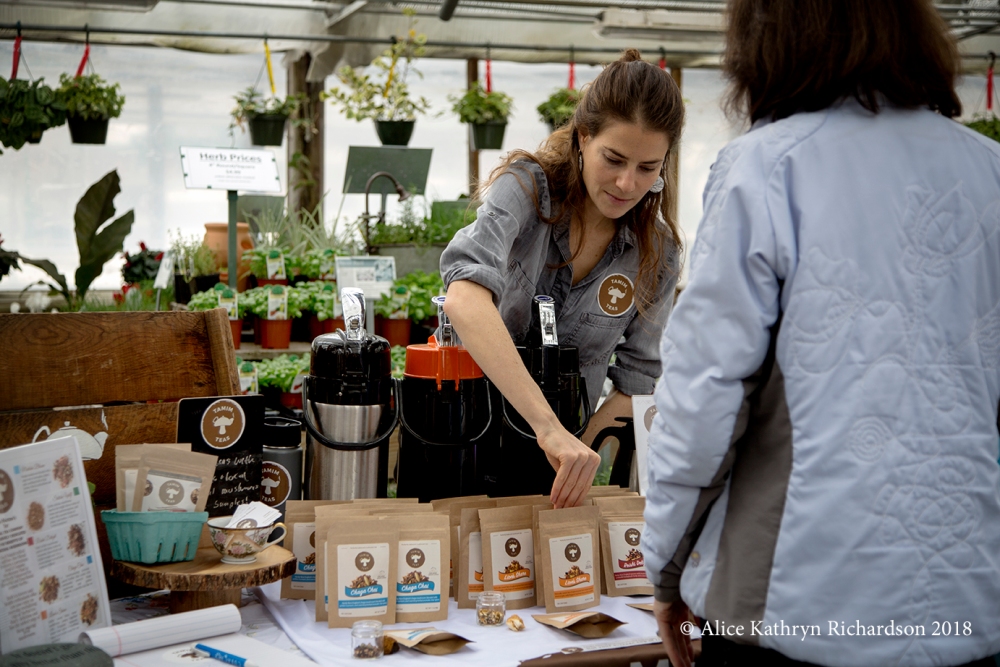 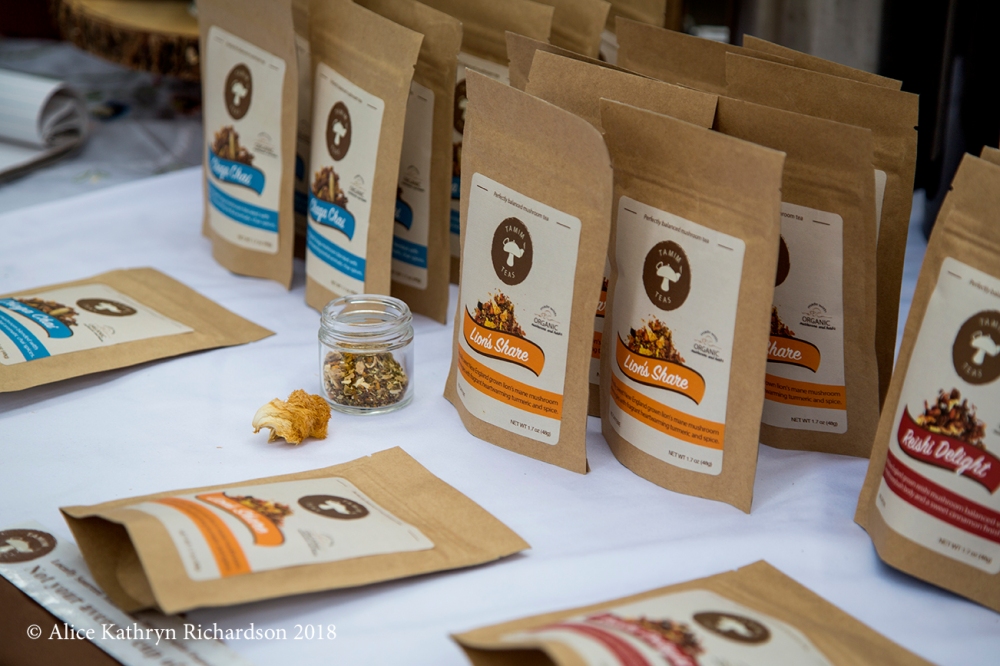 Tamim Teas started three years ago, but Liat’s interest in mushroom tea began long before that. About fifteen years ago, a friend of hers had an immune deficiency disease and was looking for a way to improve his immune system response. He had found out about mushroom tea and its medicinal properties from Chinese herbalists, and he urged Liat to try the raw mushroom tea. “I drank it sort of in spite of my hesitation, and I just started to get more infatuated. I remember looking it up on the computer and being like, ‘okay, like, I believe you, but do I believe you?’ I realized that there was just such a depth of culture related to the mushrooms that I didn’t know.” It was years before Liat realized that she had stumbled back into something that had been a part of her family history long ago.

Each Tamim Tea blend is a combination of “what I know to be good and what tastes good,” Liat says. “At the end of the day, medicine is only good if you take it, right?” As she sipped the mushroom tea that her friend brought her years ago, she realized that while she could recognize there were health benefits to the tea, she did not enjoy drinking it. “There were all these cultures around [the world] that were drinking it as is, but I just didn’t like it.” As a hobby, Liat collects herbs and spices wherever she goes, and she realized that while she was begrudgingly drinking straight mushroom tea everyday for the health benefits, she was joyfully drinking herbal tea everyday for the pleasure. “One day I sort of just realized, ‘why do I have to drink these separately? Why don’t I just combine it and that way it could be like an everyday herbal drink, that I’m drinking anyway, but with the added benefit of the mushrooms?’”

From there it was just a matter of figuring out which mushrooms went with which herbs and spices. “When you create blends, you’re working with, like, half a gram, so things really matter,” says Liat. The lion’s mane mushroom is slightly sweet, so Liat naturally paired it with a little spice, and the Lion’s Share blend came together quite serendipitously she says. “I was enjoying it so much, I just wanted to share it with everyone, you know? So it became sort of like this life mission of mine to introduce and also create blends that people could enjoy, with the added benefit of something local that’s being done in a sustainable and responsible way.” 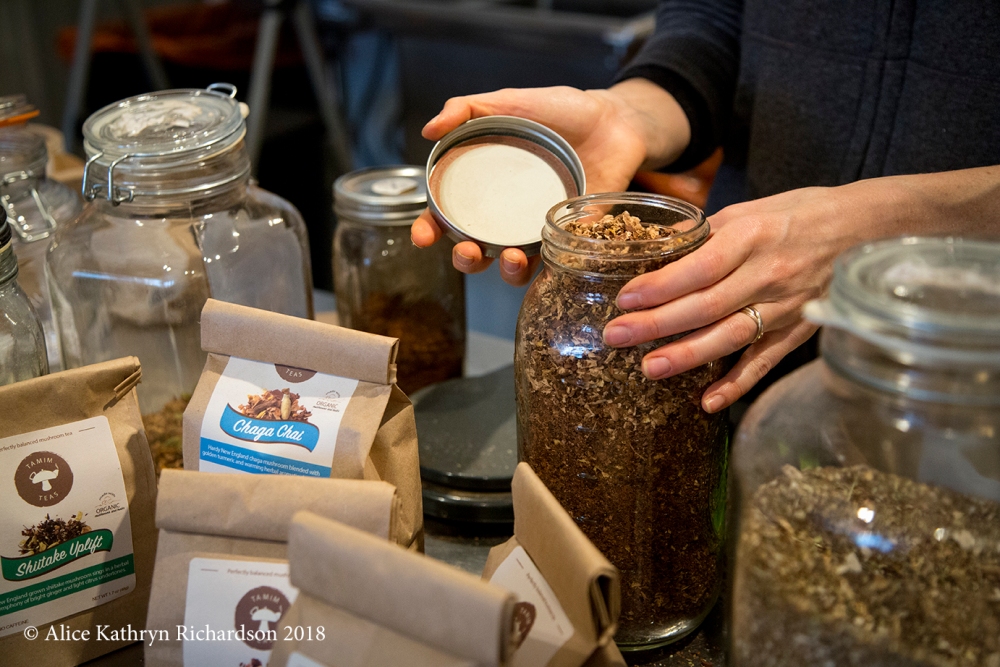 Tamim Teas offers unique herbal blends for each of the five medicinal mushrooms that Liat sources locally: chaga, lion’s mane, reishi, maitake and shiitake. People who cook are often familiar with shiitake and it’s smoky, earthy flavor, but all five mushrooms have a long history of use as teas. Historically, they’ve been used to treat insomnia and stress, as an anti-inflammatory and anti-oxidant, to rebuild the immune system, and for their overall calming effects.

Maitake and lion’s mane mushrooms grow on dead or dying tree branches and stumps, which mean they’re on or low to the ground. Heavy metals and other contaminants can be found in the topsoil, so sometimes wild-foraged mushrooms can contain these toxins. Liat sources her mushrooms from family farms in New England that guarantee her mushrooms are free from contaminants.

Chaga mushrooms, however, cannot be cultivated, and only grow on living birch trees. “If you forage it in an aggressive way where you’re taking too much off at one time, you can kill the tree. Chaga takes years and years to re-grow, so you want to leave a little bit, and you want to also not come back to the same area,” says Liat. She also works in conjunction with park rangers who “actually GPS the areas where they forage. They track where they source it so then they’re able to keep track of areas where they’ve been and areas that they haven’t visited.” In this way, the rangers are able to protect the trees while allowing the harvesting of wild foraged mushrooms. “I have a deep relationship with the family farmers who grow these mushrooms in sustainable ways” says Liat. “I have visited the farms, and seen the farmers’ dedication to their craft for myself.”

Today, Liat finds herself continuing her family’s tradition of drinking tea, and she’s always had her family’s support, even when she told them three years ago that she was putting her post-doctoral work on hold. “I found myself a lot of nights at 3 a.m. doing these teas and tea-related things, and I just became so overwhelmingly passionate about it that I was just not sleeping, and I realized that this was like, bursting, that I had to do it, I just felt like it was such a good cause.”

Her greatest moment so far, she says, was realizing that the people drinking her teas weren’t necessarily looking for mushroom teas or teas with medicinal properties. “I think the average person is just looking for a funky, unique tea to drink because they love tea! And they like this tea, and so that was a really nice moment, that like, ‘wow, there’s this whole other demographic that I didn’t think about that can enjoy the tea, and that is now benefitting from the blends.”

Use the discount code CLEANFOODTAMIM between now and July 31st for 10% off any order on the Tamim Teas website! Visit Liat at her upcoming mushroom tea workshop at Cambridge Naturals on June 24th, and tell her The Clean Food Club sent you!