A couple of weeks ago I visited Fungi Ally, a local mushroom grower in Western Massachusetts, and I picked up about 3 lbs of assorted mushrooms. That probably sounds excessive, but let me explain.

Over the last couple of years that I have been sourcing almost exclusively from farmers markets, I’ve noticed the lack of available locally grown mushrooms. I asked the woman in charge of one of the markets I visited why there weren’t any mushrooms anywhere, and she told me something interesting. Most of the mushroom suppliers in New England are small businesses, like a lot of other food producers in N.E., but because the demand for mushrooms is so high, most producers sell directly to institutions or restaurants who can place a big order and buy their entire inventory. This is good for the mushroom vendors and the institutions, but not great for the consumer. The only mushroom vendor I’ve seen is Mycoterra Farm at the Wayland Winter Market, which is only open for 10 weeks of the year. There aren’t even mushrooms at the Boston Public Market, which has everything else! So I decided to drive out to Western Mass, where Mycoterra and Fungi Ally are based, to get the inside scoop from the growers (stay tuned for that story!). 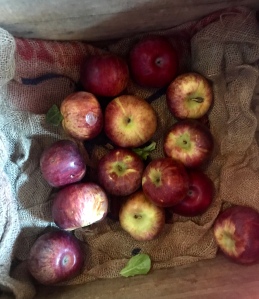 So while I was at the Fungi Ally, I picked up a huge bag of mushrooms to satiate my mushroom deprived family (I mean me). I was thinking up different ways to use them, and one of my favorite ways is to sauté them with onion, sage, and cranberries. But that’s a fall/winter recipe, and we started spring a month ago. Or did we? It still feels like winter outside (I can see snow flurries from my window this morning), so I figured why not make one last winter recipe? At the bottom of the barrel, I found a few Cortland apples at Freitas Farms’ farmers market stand this weekend, so I decided to make Baked Apples Stuffed with Quinoa, Mushrooms, and Dried Cranberries, most definitely a fall/winter recipe. I’ve still got overwintered onions and dried sage to go with my overwintered apples, so this recipe is perfect.

salt and pepper, to taste