When the last shoppers leave from the Wayland Winter Farmers Market, the place turns into a bartering free for all. Vendors wander over to each other’s booths and shop the wares. Angela leaves her table of Chocolate Orange Rounds and Vanilla Chai Cashew Smoothies and heads over to Winter Moon Roots. In exchange for several bags of Nüssli 118° Kale and Onion Crisps, she gets a 10 pound bag of beets, carrots and turnips. She’s excited to use all of this fresh produce in her raw kitchen. 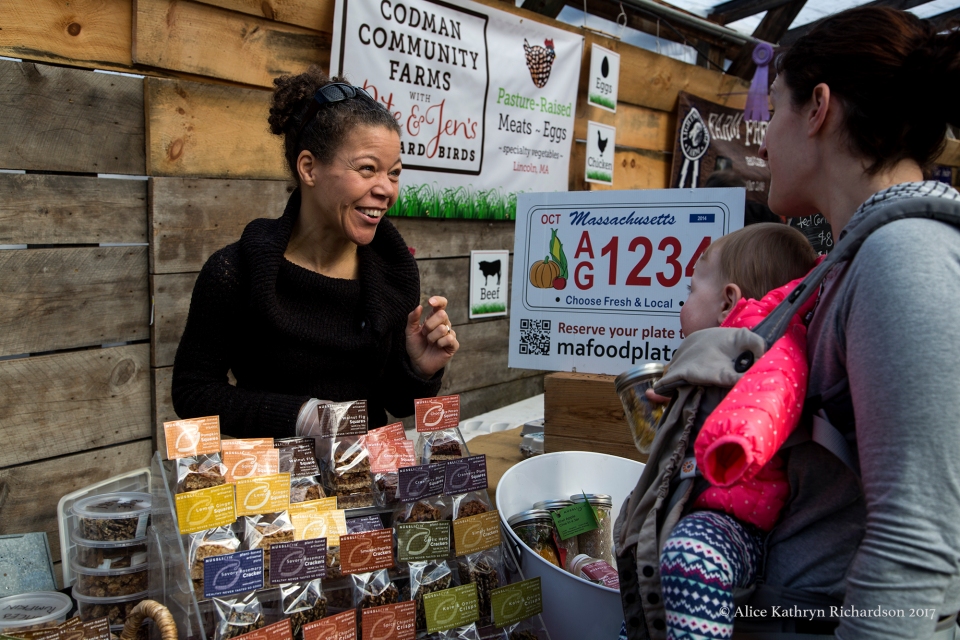 Angela Hofmann owns Nüssli 118°, a raw and vegan kitchen in Cambridge, Mass. Nüssli 118° makes sweet and savory drinks, snacks, meals and desserts. They also offer a weekly delivery service of their products and host cooking classes on the weekends. 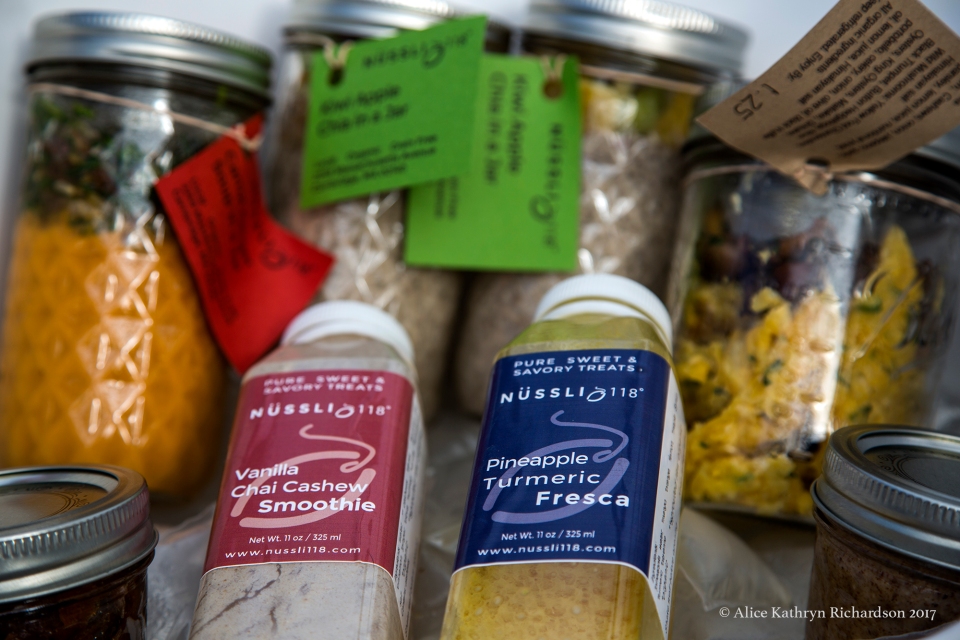 Angela started eating raw many years ago, before it became a popular food movement. For years, she struggled to find foods that worked for her body, and eventually found success with raw food. Angela also eats dairy-free and gluten-free, and she wanted her kitchen to reflect the same clean eating. At Nüssli 118°, nothing is heated over 118 degrees, hence “raw food.” They use only raw seeds, fruits, vegetables and sprouted nuts. Sprouting activates enzymes and makes nutrients easier to digest, and raw ingredients heated below 118 degrees retain those vital nutrients better. A lot of vegan places are heavy-handed with grains, she says, but not Nüssli 118°, making it a great choice for people who eat vegan or paleo. 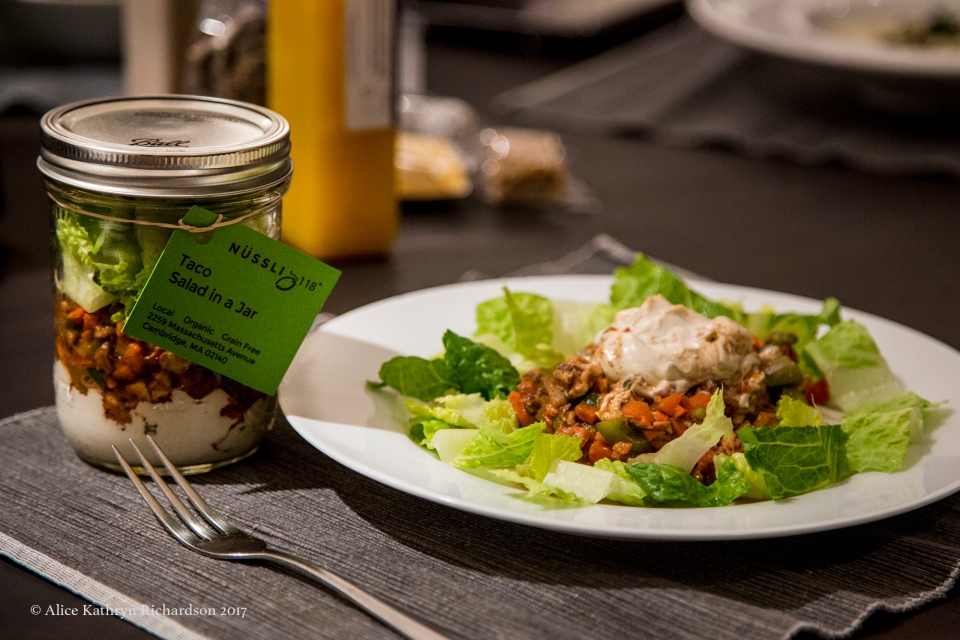 The ingredients used at Nüssli 118° are also organic and most are locally sourced. Angela gets them from local places like Atlas Farm, Old Friends Farm and Winter Moon Roots. If she can’t find the organic products that she’s looking for locally, she’ll swing by Whole Foods. “Organic is better for the environment,” she says. We all live on the same planet, and she wants to support a system that supports people and planet.

As for the first half of the company name, the meaning wasn’t readily apparent. “Nussli sounds like muesli,” I say. “Is it related?” Muesli is a Swiss German dish of rolled oats, dried fruit, seeds and nuts, and eaten with a plant-based milk. Dr. Maximilian Bircher-Benner, who believed that a raw diet was an essential part of healing, created muesli in the early 1900’s. Nüssli means “small nuts” in Swiss German, Angela says. Her husband is Swiss German, and she embraces the similarities between her heritage and the history of raw food enthusiastically.

Angela spends a couple days per week at farmers markets and food demos, and the rest of her time is spent at the Nüssli 118° kitchen in Cambridge. Angela invites me to spend the morning with them there while they try out a recipe for bread. They tried it once before, she says, but it didn’t meet their high standards. Angela pulls out a blank piece of paper and a sheet with handwritten notes scribbled all across it. We’re going to restart this one from scratch. 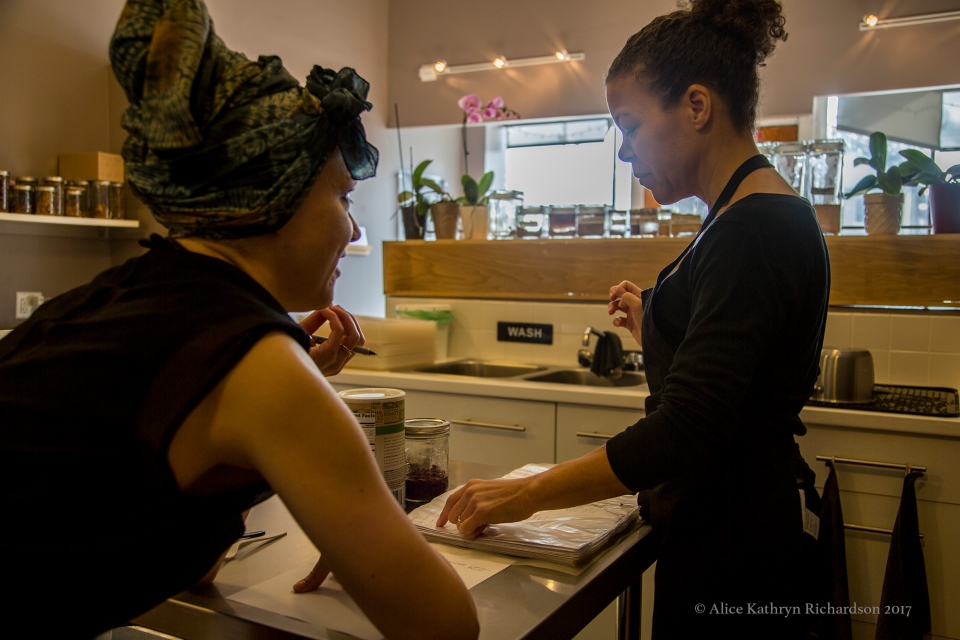 She pulls out the blender reserved for sweets and add ingredients one by one: pineapple pulp leftover from making Pineapple Turmeric Frescas, goji berries, nutmeg, and coconut sugar. Angela and Laura, a woman who helps her in the kitchen and at demos, stop to taste each addition, actively creating the recipe while they blend. I humbly suggest cinnamon, but Angela is hesitant to mix that flavor with pineapple. When one of her regulars walks into the store, she offers him a taste, too. “Cinnamon?” he suggests. Angela laughs and adds a pinch of cinnamon. It’s a good addition but it still needs something else.

After 30 minutes of trying different combinations, Angela decides that she needs golden raisins. Only she doesn’t have any golden raisins. We make a quick trip across town to Whole Foods to get a cup, and as we scoop the golden raisins into a container, she introduces me to the man who stocks the bulk aisle. “How’s your family doing?” he asks, and they chat for a few minutes. “I’m here a lot,” Angela explains to me, and laughs as we walk to the register.

Back at the store, Angela eagerly adds the raisins to the blender. Laura then spreads the mixture onto Teflex dehydrator sheets and puts them in the dehydrator for 5 hours. I go back the next day to taste the finished product, now that it’s dried and condensed. We eat a few slices with a bit of banana cream drizzled on top. 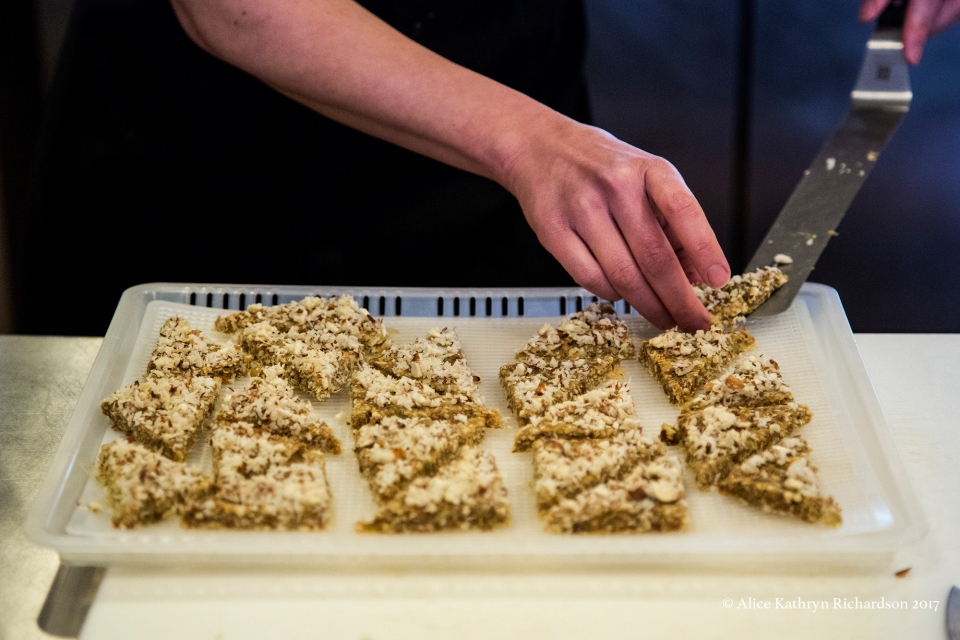 Angela calls the finished product pineapple bread, but that’s a little misleading. It’s more like a fruit bar meets a slice of pecan pie. We debate the best name for this new sweet treat, but can’t decide on one. In the end, Angela decides it still isn’t perfect and they won’t be selling it just yet. The Carrot Raisin Almond Loaf that they made last week was much better, she says.

But just between you and me, it was delicious. If you get a chance to swing by the Nüssli 118° table at the farmers market this weekend, be sure to ask how the pineapple bread recipe is coming along!

For more information about Nüssli 118° products, classes and farmers market schedule, check out their website. Click the logo below to shop their products and classes.