I grew up in a lively city in southern India. Summers were long and winters mild. I marked the time of the year by the seasonal fruit and vegetables that vendors carried through the city streets on carts. The vendors called out their wares just as American ice cream trucks play music to announce their presence. Juicy mangoes in the summer, creamy custard apples in the fall, velvety chikoos in the winter. The blow of a harsh season was softened by the appearance of a missed fruit or vegetable.

At the age of 14, I moved to a suburb of Boston and was surprised by the seemingly season-less variety of produce in supermarkets. Apples in the summer? Pineapples in the winter? It was a prize for the side of me that likes immediate gratification. I didn’t have to wait for the blistering heat to eat a mango!

But then I tasted the beautiful fruit and was hit with the difference in flavor and dimension from the fruit I knew. The sugar content was often there, but missing were the actual flavors that characterized the produce. It was like seeing a role model from a distance, running up to them, only to encounter an empty Madam Tussauds creation.

This has shaped the way I shop for food now. I look forward to the arrival of produce at the farmers’ markets around me, and plan what I make depending on what is in season.

On my way back from a day of hiking and rock climbing in Rumney, a town in New Hampshire, I drove past some gorgeous looking tomatoes at Longview Farm, and made a U-turn to go back and get some. Ripe tomatoes are one of life’s simplest pleasures. My grandfather, a toxicologist, always encouraged tomato consumption, citing the high lycopene content and adding, “They taste pretty good too!”

When tomatoes are in season, my mind jumps with joy and dreams of all of the incredible dishes that I can make featuring the seasonal guest of honor. With the tomatoes from Longview Farm, I made gazpacho, a chilled soup popularized in Andalusia, a province in southern Spain. The recipe that I make is inspired from one of my favorite food blogs, Lottie and Doof, which is an adaptation of Anya von Bremzen’s recipe from The New Spanish Table.

I made a smaller portion, suitable for two people, and substituted a couple ingredients. It’s perfect for a light summer lunch or dinner. Next time you pass by a farmer’s market bursting with tomatoes, seize the season and make this soup! 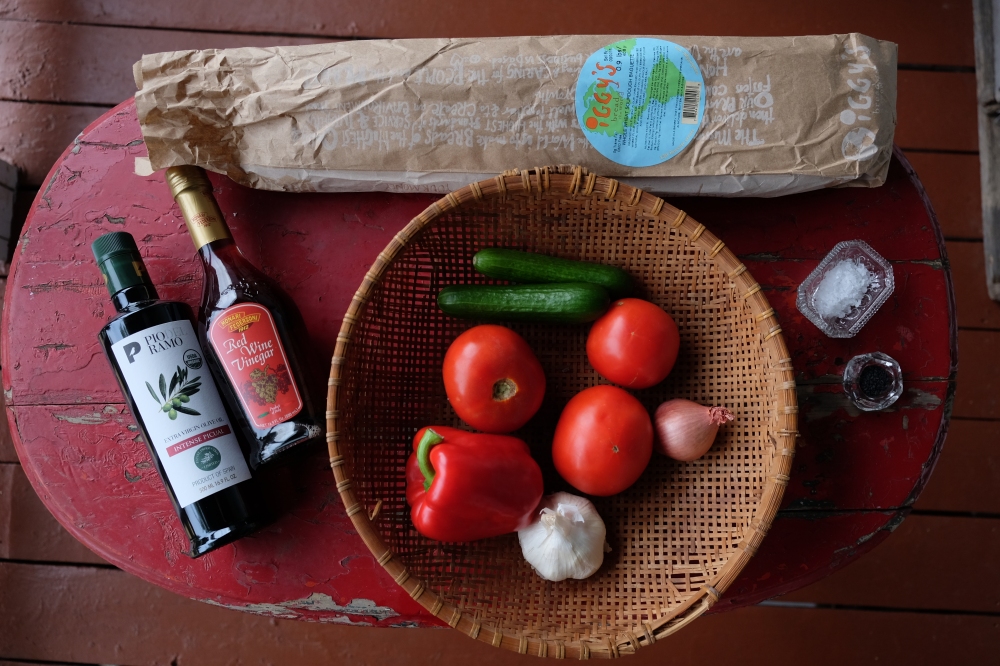 From the farmers market: